PicLens 1.6 for FireFox Released (or what I've been up to)

I recently moved from Washington to California to work on PicLens. PicLens is a 3D, hardware accelerated, full-screen photo viewing plug-in. Version 1.6 adds the 3D wall for viewing photos at sites like Google Images, Yahoo Images, Flickr, Facebook, MySpace, xkcd, etc. You can download it for free here.

Here's a marketing screen shot, but that's really what it looks like.

Those of you who are aware that I once worked on the Internet Explorer team at Microsoft might have some insight as to what I'm doing down here. Hint: There will be an IE version very soon.
Posted by jeffdav at 10:49 AM 1 comment:

I bought a Dell 2405FPW. The 24" wide screen makes me very happy. My goal is to maximize the use of the real estate this presents. I was watching TV and browsing the web with this goal in mind. Since Media Center (like all good video players) likes to keep it's aspect ratio fixed, I kept ending up arrangements like this: 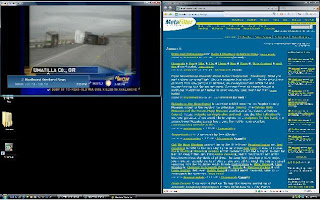 Notice the big chunk of unused space in the bottom left corner. There was no way to fill this space. Then I hit on the brilliant idea of rotating the monitor to portrait and stacking media center on top of IE. Then I could use every pixel. I was excited.

But I was thwarted:

I don't know what to say. As a user, my first thought is "there is no excuse for this." As a developer who used to work on Windows, I know there was at least a reason for it. Probably some video card didn't work in this configuration, or it would have been too much testing for a non-critical scenario, or something. But it made me mad.

Now I have NetFlix though. It has an in-browser player for viewing videos on demand. Now my dreams of real estate maximization can be realized: 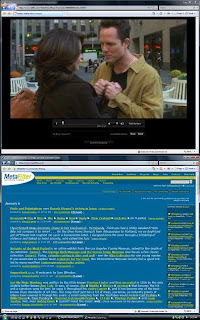 lenovo thinkpad R61i (or: a tale of two laptops)

Back in the day, we all knew who made the best laptops: IBM. Not because they were the cheapest or sexiest machines around. They were the toughest. They were tanks. You could drop it four stories and run it over with your car (though this was before SUVs were so popular) and the damn thing would be just fine. Of course, they were way too expensive for your average middle-class highschool kid to ever get.

When I was at MSFT I managed to get a company-issued Sony Viao TR5GP. I loved the Viao itself: it was small, portable, sexy, and not too slow. I hated Sony though. They refused to make drivers available for download or even seperate install; you had to buy the recovery DVD for $10 and then use it to fully recover the OS. Of course, doing that brought all the OEM crapware with it. So it was a constant struggle.

Now I find myself in need of a notebook once again. I will need one for the move, and Sara has been wanting one to use around the house. I disqualified Dell, because their machines are all flimsy crap. And I disqualified Toshiba because they're ugly and seemed to always have weird issues that weren't really problems, per se, just quirks. So my thoughts naturally turned to ThinkPads.

It came last night, and I like it very much. Lenovo does not seem to have ruined the ThinkPad. It doesn't have the cute IBM logo, and it doesn't seem quite as sturdy as I remember (what is these days?), but I may have just built it up in my mind over the years. It does seem better than all the Dells I ever used at MSFT. They keyboard is nice and clicky. The screen is bright and clear. The USB ports are plentiful. It came with a nice assortment of crapware, but I uninstalled it all. It did require something like 62 Windows Updates out of the box, which was dissapointing, but what can you do? It's Windows.

Anyway, what I am getting at is just say no to Dell; buy a ThinkPad.
Posted by jeffdav at 10:00 AM No comments: